This summer, Baidu's streaming service iQiyi announced its plan to expand towards new markets in Asia-Pacific. The platform was launched in the second half of 2019 in Vietnam and Malaysia and is eyeing other strategic markets in Southeast Asia. Meanwhile, in June, Tencent acquired the Malaysian service iFlix. The latter has been struggling to generate profit and accumulated losses over the past few years, opening an opportunity for the Chinese media group to acquire its significant content library. As of 2020, iFlix is operating in 13 countries across Asia, a market which Tencent will take over by both maintaining the brand's operation and expanding its own service WeTV on those territories. For now Tencent's two streaming services are operated independently but are supposed to merge over time. WeTV was launched during summer 2019 in Indonesia, Thailand and Vietnam.

The Southeast Asian streaming industry has seen considerable changes this last year as Chinese streaming services have been taking over a large part of viewers and investing in local content significantly. Chinese media groups are capitalizing on the potential of a huge and still untapped market. Only 3.6% of Southeast Asian households were paying a subscription for legal streaming services as of end 2019. At Q1 2020, US based platforms had the largest share of paying subscribers, which is mostly explained by a sharp increase of Netflix subscribers during the worldwide lock down measures and the introduction of cheaper mobile plans in Southeast Asian strategic markets at Q4 2019 and Q1 2020.

In 2019, legal online streaming services generated $560 million in Southeast Asia out of paying subscribers alone. The biggest markets were Singapore and Malaysia, where OTT pay TV services are gathering the vast majority of paying users. But SVOD is not leading the development of video services in the region. The video streaming markets in Southeast Asia are clearly demonstrating a viewers' preference for AVOD (advertising video-on-demand) platforms.

Most of those countries don't have a very high pay TV penetration (except Malaysia), and piracy is still widespread despite authorities and telcos' efforts to tackle it. That's why most media consumers in Southeast Asia are not used to paying to access video content. In the region, platforms offering free access to their content reach much more viewers than SVOD pure players like Netflix.

But the advertising based financial model has proved hard to turn into sustainable products. Some actors that have been on the market for several years are still struggling to generate profit, as Hooq's shut down and iFlix' acquisition showed us last quarter. This is due to a highly competitive environment where OTT platforms have to invest in new content constantly, despite advertising revenues remaining rather low in the region. Chinese OTT might be the only actors who can afford to keep AVOD as their main model to reach a large number of viewers while still investing in valuable content without making sufficient operating margins in the next few years. 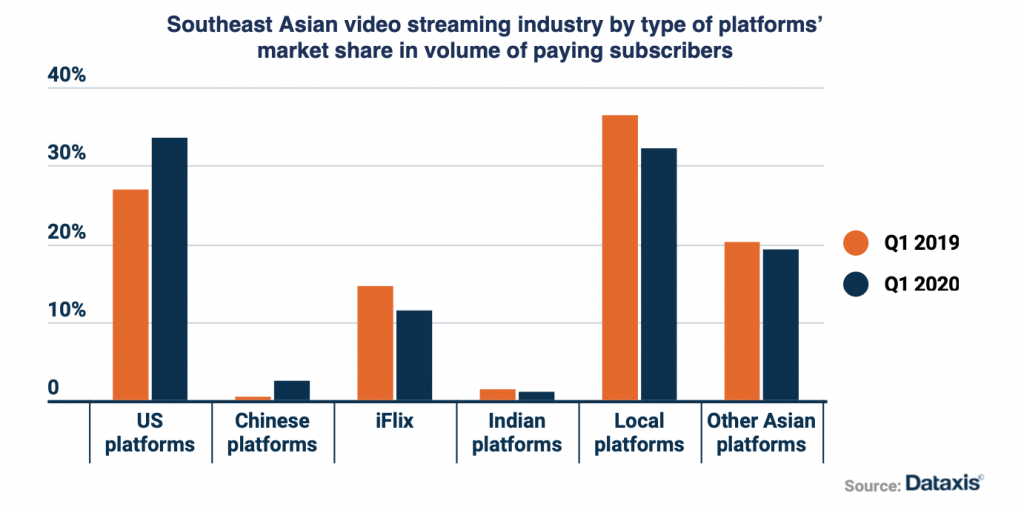 Local platforms, if they survive the current downturn of advertising markets following COVID-19’s impacts on the media economy, will have to face strong competition especially from Chinese OTT. Observers notice that iQiyi might be merging with Tencent's WeTV soon to create the world's biggest streaming service. Both brands are already gathering a growing audience in Southeast Asian markets and the large amount of regional content in their libraries is also more likely to attract customers which were not considering paying subscriptions for US platforms. Since the vast majority of local players are based on an AVOD or a freemium model, their survival will most likely rely on their ability to generate revenues by introducing and developing paid offers.

go back to all press releases

The related data and analysis are included into:

Dataxis market reports provide the most comprehensive data set in terms of market sizes, revenue development and relevant companies within a total of more than 150 countries. We look into the future of TV, Telecom, Media and Digital industries providing the latest trends and tangible subscribers & revenue forecasts. In addition to detailed figures and graphs, it also features geographical comparison and competitive bench marking.

At the beginning of April, the Latvian operator Tet launched its new OTT platform, Tet+. Its particularity: a points-based system in which the user subscribes to an offer with basic channels and a number of points that can be allowed to buy access to more channels or to Tet's own...

Amazon channels: the other key streaming service of the US e-commerce giant

One of the most critical aspects of any digital pay TV operation is the selection and deployment of a robust conditional access system (CAS) for content protection. But buying a CAS typically adds a significant expense to total capex costs faced by an operator. However, a radically new approach is ...

The inaugural edition of Nextv Series Caribbean will bring together in a friendly virtual format the leading pay TV operators, TV networks, FTA broadcasters, OTT platforms, content owners, telcos and ISPs from over 20 Caribbean nations. They will meet around a series of strategy panels to discuss the latest challenges ...

Nextv Ad Latin America 2021 will bring together the entire TV advertising ecosystem to explore the latest developments in TV advertising and how programmatic and addressable TV strategies integrate. Experts from publishers, brands, media agencies, operators and tech providers will meet in this virtual event to share their insights and ...

The Nextv Europe regroup 350+ executives and decision makers from the TV, Telco, Video, OTT & Entertainment Business in the European region for two days of conferencing and online networking to discuss the cutting-edge trends and future technology insights that will transform the global broadcasting ...

As pay-TV operators add catch-up and retro-EPG functionalities to their user interfaces, they face generating a frustrating experience for their subscribers. Typically, a TV platform starts playing linear broadcasts from the EPG-indicated start time. But TV programmes often don’t start exactly on the EPG time, which means the viewer is ...